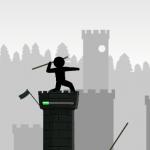 The goal of this man is to kill all stickmen.The best free gogy3 games from all over the internet just for you.

Javelin Fighting is a fun 1on1 fighting game gogy in which you must show off your javelin throwing skills. You have been invited to attend the national javelin throwing competition and you must defeat the other combatants to show that you are the champion! Use the left mouse button and your mouse movement to aim the javelin and increase your throwing power, then release the mouse button to shoot.

You must try and hit the opposing player who is standing on a pedestal at the opposite end of the playing field. Each player has a health bar and you must hit them several times to eliminate them - head shots do more damage! Try to shoot as quickly as possible and aim quickly - you can only sustain a few shots yourself so you must work fast with your javelin!

The first release is April 2017. Javelin Fighting is improved on March 2018 and can be played exclusively on http://gogy.xyz.

Controls: Hold down the left mouse button and release your mouse to throw your darts to hit enemies if you play the game on your computer.