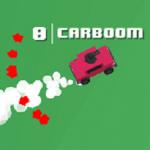 Carboom.io is a cool .io car game which is playable gogy 2018 games. This is a top-down multiplayer vehicular combat video game with smooth blocky graphics and fast-paced action. You need to drive a car and shoot down other players' cars. Pay attention to your surroundings and avoid crashing into an object. As you level up, you have the chance to buy an upgrade to become stronger and better in dominating the area!

The game also features over-the-top funny action. In this fun and competitive game at gogy car games, your only goal is to bring down as many combat vehicles as you can and make them all explode. Earn points by defeating other players and try to be on top of the leader board! Will you be able to blow up everyone or will you go kaboom? Good luck and have fun!

In addition, the other enemy players also carry a canon on the roof, so watch out for enemy missiles heading your way! Move from one side of the field to the other, and earn as many points as possible, while you shoot your way through enemy vehicles!

This special moment requires a special ring designer, so let's play the game at http://gogy.xyz/. There are numerous games with this theme such as Speedboats.io

Use the WASD or arrow keys to drive