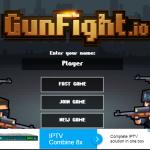 Gunfight.io is an intense multiplayer game with pixel graphics that you can play here on Gogy io games. In the game you and your team must eliminate the other team in a gunfight. Join either as a counter-terrorist or as a terrorist. Your mission in this game is to hide behind objects to protect yourself from enemy shots and try to shoot down opponents.

The first team to make 25 kills wins the match. Therefore at gogy play, be careful and aim like a real killer. To shoot, you need to enter scope mode; this mode has a very limited visibility and you will have to stand up (which means your body is exposed and vulnerable to an attack). You can hide behind cement barriers before sniping enemies across the war zone.

In certain maps, you can pick up a rocket and use it to deal high damage. Back up other team members to ensure victory. Gunfight.io lets you become a heroic soldier or detestable villain.

Comment on the game and assess it highly. Share it with companions. Then seek games Zombs.io at http://gogy.xyz/

Use the AD or left/right arrow to move

Up and down arrow to go up / down a ladder