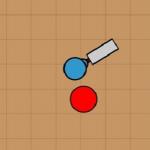 Swordz.io is an addictive multiplayer io game which is playable best gogy Games. You can be played solo, with friends or with online players all over the world. You will start the battle with only a tree branch, you must use your skills to beat players with you limited weapon to gather food. This can be used to upgrade your character so that you can become a force to be reckoned with during the fight.

The graphics of Swordz.io is nothing special, to be honest. It’s quite similar to any other classic IO games. Your avatar is a round-shaped color balls holding a sword in its hand. Your target is to destroy all other orbs + enemies in the arena and dominate the leaderboard.

There are two different game modes available to play including a player vs player mode and a food chain mode. If you love this game then try out EvoWars.io as well!

Share this interesting game with your friends! You may want to play the following games: Carboom.io and Targ.io. Hundreds of games with many new and enjoyable things are waiting for you at, and you at http://gogy.xyz/ an easily explore them with a few clicks.

Use the WASD or arrow keys to move