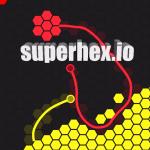 Superhex.io is territorial seizure .io game that you can play here on go gy games. Inspired by Splix.io, the new cool IO game Superhex brings improved graphics, wide color palette and more fun into a primary version. Unlike other popular IO games like Agar.io or Slither.io, in Superhex io, your goal is to conquer as much territory as possible, don't get hit, defend your land and try to find the best strategy to conquer all the map. Don't hit the edges of the map, otherwise your efforts will be vain.

To control you character you only use the mouse. Your character will follow the drawn trajectory. Create territory by drawing shapes with the colored line and connecting them back to your existing territory. You have a weak spot, your line. If an enemy touches it, game will be over for you. You can also connect any neighboring pieces to your base and steal hexagons from other players and of course kill them to win more space for expansion.

Each block in Superhex io at juegos de gogy is worth 1 point and occupies 0.003% of the map. You will win the game if you conquer the whole map, namely if you territory reaches 100%. Even though you are unable to see your position on the map, you know how much you have already occupied. But be careful, if another player touches your trail you will loose and start all over again.

We are very happy if you write your feedback and assessment for us. Tell your buddies about this game and have fun with more similar games like SuperSpin.io at http://gogy.xyz/

Use your mouse to control your character.