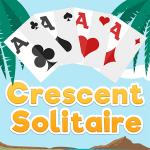 Crescent Solitaire is the card game which is playable gogy 4 games. The other versions of the game are the casual version where you have unlimited shuffles and the easy version which allows you to use the open spaces. Your main object is to move all of the cards from the outer piles onto the central foundation areas.

In this version at kids gogy free games, you start with aces and kings in play and must pull cards from the crescent above instead of the deck. Stack cards of the same suit in ascending order on the aces and descending order on the kings. From kings to aces and aces to kings, try to contain the chaos of Crescent Solitaire!

You may move cards between each pile to create moves, if you get stuck even then you can use the reshuffle feature to completely mix up the decks. You may only use this feature three times though. Good luck!

The game will be fun if you share it and play with friends. And if you love this game, play some other games like High Low at http://gogy.xyz/ to have more relaxing moments in life.

Use the mouse to play the game