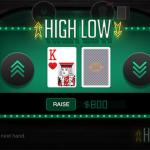 High Low is fun game that you can play here gogy play. It goes by different names. For example, BetSoft calls it Draw Hi-Lo. This version addresses the game by iSoftBet. They can't seem to agree on its name either, referring to it as High Low, Casino High Low, and Las Vegas High Low. Since "casino" is too general and I've never seen the game in Las Vegas, I'm going to call it just "High Low."

Whatever you call it, it is a simple game where the player bets whether the next card in the deck will be higher or lower than the current card. The odds are roughly commensurate with the probability of winning.

★ I do not know the number of decks used, however it doesn't make a difference mathematically, if you ignore ties.

★ Cards are ranked as in poker, except aces are always low.

★ The player is given a random card. As long as it is a 2 to queen, the player will be given the choice to bet whether the next card will be higher or lower.

★ Except for the first decision, the player may quit at any time and collect his winnings to that point.

You can choose the card by using your left mouse in the game.