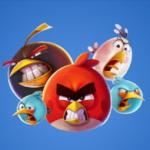 Crazy Bird is an HTML5 game offered by GoGy Game that can be played in browsers such as Safari and Chrome. The game is playable on a tablet or mobile (iPhone, iPad, Samsung, Android devices and Windows Phone).

Have you ever watched the popular animated movie Angry Birds? Crazy Bird is an Angry Birds-style strategy game. At the same time, it is a physics-based action games. When you tap the screen, the bird will fly to the opposite side. Simultaneously, you must dodge all spikes and other obstacles. It's worth noting that you can switch between skins. If you like the Angry Birds film version, you won't want to miss this game. The game is designed in a vintage pixel format. Are you prepared?

You can also help other players in their game. In addition, players have the opportunity to play action games similar to this game like Dynamons 2.

Use mouse to touch