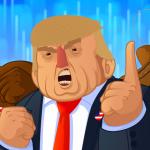 Play Trump on Top game online at online gogyy. Trump on Top is one of our hand picked strategy games that can be played on any device.

Trump on Top is a funny fighting game in which you must defeat an opponent by hitting their head on the stage. The harder their head hits, the higher the damage. You can choose a political character, such as Donald Trump, Hillary Clinton, and Barack Obama. Play in tournament mode to unlock new characters. You can also play with your friend in this gogy game.

Warm up your knuckles and get ready for the final fight of the elections! Choose between Donald Trump’s bloc and the democratic one led by Hillary Clinton and show us who the best patriot is. Play against the machine or challenge your friend with the 2 players mode. Will you be able to win this bloody fight for the White House? Find out now!

We are pleased to receive your comments. If you think well of the game, rate it highly. Don’t forget to give an introduction to your close friends. Explore new games such as Color Tunnel and Five Nights at Freddy’s at http://gogy.xyz