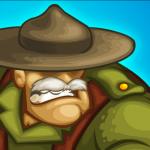 Have fun playing an entertaining game of action, shooting based Battalion Commander 1917 is an exclusive game from Gogy Xyz Online. During World War I, a normal but valiant soldier receives instructions that appear to be impossible. In a race against time, he must penetrate into enemy territory to locate and destroy a massive hostile machine that might potentially save 1,600 of his friends. You are this soldier! Free your fellow troops who are being held hostage on enemy territory, and they will accompany you on the operation. Collect coins on each run to purchase key upgrades such as a hefty tank!

Besides, we also suggest giving players a lot of other new games similar to this special game like Fight Simulator 3D. You have joined and topped the chart. What is the best class of players today?

Have a great game in https://gogy.xyz!

The squad follows your mouse/finger. Click the left mouse button or tap the skill button to activate skill (if It's purchased).