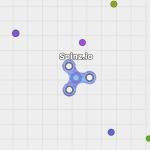 Spinz.io is a fidget spinner .io game which is playable juegos similares de golgi! This game is very similar to another popular IO game Agario, so the game concept must be familiar to the majority of the players. Like in Agar IO, all players are in charge to collect colorful dots, scattered all over the playfield, but this time you have to control a fidget spinner!

Enter the arena and battle other players with your fidget spinner. You can choose its color and enter into exciting fights! Collect scattered dots to increase your RPM. You need to be patient when collecting dots to steadily build your RPM; a higher RPM is always better.

If the another spinner with the much higher RPM number hits you, you will die and give up all your points. But don't panic every time another player comes near you because if the difference between your score and the score of the player who hit you, is not very big you won't die, but you both will loose some amount of the points. You can also collide with other players to receive their points, but pay attention at their RPM number which is depicted under each fidget spinner. Find out in gogy play online!

You must pay attention to other spinners that are 4 times faster because they can instantly kill you with one collision. The game also features Whirlpools! Enter a whirlpool and get shot out at an insane speed. These are useful both for escaping and attacking!

We prepare you a large number of exciting games at http://gogy.xyz/ such as Vili.io after playing, remember to share your favorite game and rate it highly.

The mouse to move the spinner