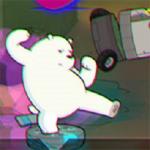 Forget about cute cuddly polar bears – this virtual polar bear can fight like a pro and has a host of martial arts skills. Play as Ice Bear from the popular Cartoon Network TV Series We Bare Bears, and kick some robotic ass in this action-packed arcade fighting game – Polar Force free online at gogy play! Can you help our furry hero fight off the army of evil robots that are trying to pick a fight with him.

Using a combination of powerful punches and quick kicks, destroy the robots that are looking to do you harm. Each robot has a specific number - this designates exactly how many hits you must land in order to destroy them. You will be attacked from both the left and right, so be sure to move swiftly, evade their attacks and cover all possible angles. As you fight, the robots will drop weapons such as axes and mallets that you can pick up to deal extra damage. Will your martial arts skills prove strong enough to complete all the levels? Try Polar Force out today and find out!

A or D or left/right arrow to attack the left or right side.