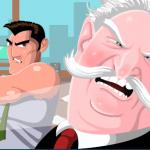 A bad day in your job can change you life forever. Specially if it ends up with a bullet inside of your clients head. After things got a little too messy during a meeting, your own boss wants you out of the picture, so it’s time to take the highway and pay him a visit. In this awesome side-scrolling fighting and shooting game gogy, you have to help The Office Guy take revenge on his corrupt coworkers and his badass boss. Use your bat and some other weapons to kill them all and complete all kinds of tasks.

The Office Guy is an epic fighting platform action gogy game in which you control a simple office guy who wants to try and bring down his corrupted boss! During the initial levels you are equipped with a simple stick and you must find new weapons to dish out increased damage. Work your way through each level and area of your office and defeat any opponent who stands between you and the boss!

As you progress you will unlock some awesome new weapons such as shotguns, machine guns and even a deadly rocket launcher. Can you persevere and finally extract revenge on the boss who has caused you so much pain? The gameplay is simple, the controls are easy to pick up and the graphics and music are cool! Step into the office today and take out the boss!

Enjoy The Office Guy at http://gogy.xyz!

Self EmployedComplete task 10 in The Office Guy

Controls: Use the left or right arrow keys to move, the down arrow to grab the text or the weapon, the space button to attack the enemy.