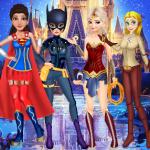 Do you love the beautiful princesses in the fairy tale? Join Princesses Justice League Dress free game at gogy girls play and you will have a chance to meet them and become a talented stylist for them. Four princesses  Elsa, Anna, Rapunzel, Moana just watched the movie Justice League last night and now they fall in love with the costumes of many superheroes and they want to try them on, but they feel worried because they don’t know the way to mix them with accessories perfectly. Are you willing to give them a hand to make them more beautiful and happier?

Let’s start to dress up for them one by one. The wardrobe in go gy games contains plenty of clothes of the superheroes like spiderman, batman, iron man, wonder women and so on. As you know, many characters have a mask, too. If you are a loyal fan of super heroes series film, let’s show off your knowledge of them by mixing the perfect costumes.

At first, select one of the suggested clothes and then select the suitable weapons that are suitable for the costume. There are plenty of styles and colors for you. The next step is to select the gloves and shoes. E.g, the shield is suitable for the captain or the sword should be mixed with wonder women’s clothes.

Do you like the game? Share the game with your friends to challenge them. Rate it by giving stars and write your thought in the comment box. Play more girl games like Barbie Fairy Of The Woods and Ex Girlfriend Party at http://gogy.xyz/.

The players can use the mouse to play the game.