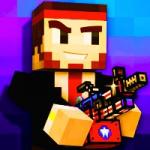 Pixel Gun Apocalypse 7 is the seventh edition of the epic online blocky first person shooter game which is playable gogy Games for kids. Fights of living and dead, of humans and zombies will never end. Virus infection continues to spread further and further. People are scared, paniced and are doing anything to survive. Enjoy!

When you start playing a game you open up a world that players need. Try your best to win before you can be shot down by the enemy. The matchup with other players in the game to reach the final victory. This shooting game differs from other games from the graphics to the way you combine with the team members and control your game to get the final result. Be careful before destroying enemies because they can attack you at any time.

In this game at gogy for school, you use five different weapons to shoot down all of the opponents that dare stand in your way. You will also need to learn your surroundings like the back of hand as you play on 8 cool maps filled with different action zones. There are 3 different server location meaning that you can play against other players from all around the world. Be ready for the challenges and exchange with other members through chat on the screen.

In addition, we also update the game moves and incorporate numbers into the game list daily so players can freely explore in their free time like Roam Maze. You can create the wonders in this game at http://gogy.xyz/

Use the WASD or arrow keys to move