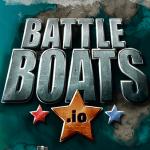 Battleships.io is a 10 vs.10 multiplayer action game which is playable gogy games 2 player. You will seamlessly jump into a game and join either “Team Red” or “Team Blue”. Collect bombs to blow up other boats. Collect the crates to level your boat. When you reach a certain level, your boat will be equipped with a steep cannon. Refill ammunition, picking them up in the ocean. Enjoy!

To be successful, you should also have two more things in mind. First, as long as the battle lasts, you may be able to respawn after your ship got destroyed. Every respawn will cost you 5 levels.

Second, avoid energy barriers turning on, as well as turrets aiming at you, because they will heavily damage your ship. So, what are you waiting for? Get on the bridge!!

We appreciate your comments so much. Find a variety of games such as Zombs.io at http://gogy.xyz/. Try them now! Share our games with your best friends. Rate them highly.

Use Arrow keys to move and rotate your boat.